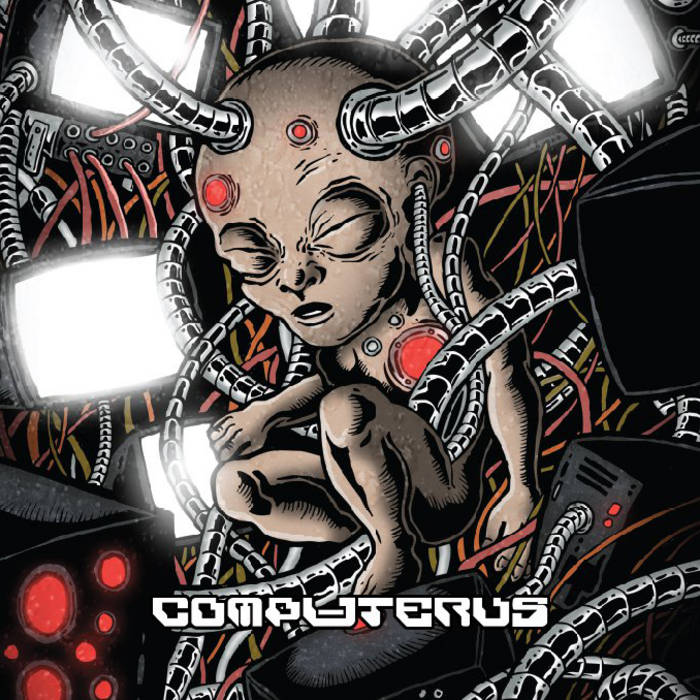 The end of the movie 2001: A Space Odyssey always freaked me out. It wasn't all the trippy traveling through time and space and it wasn't the crazy fucked up ending, it was the sudden appearance of that space baby with the big head, hovering over the planet earth that did it. Oh, there was an impression that something wonderful was going to happen, a new step for humankind, but you know what, I just don't trust babies!

So you can imagine my apprehension when I came across the Toronto electronic act compUterus, and their imagery of not only a baby, but some sort of weird cyber-womb as well. "This is the beginning of the apocalypse," I cried! Zarathustra predicted it, that 'mankind was something that must be overcome', and now here was this tuned in, linked up and cybernetically enhanced creation right before my eyes, ready to latch onto Bugs Crawling Out of People!

"No no," compUterus' main driving force Greg Kowalczyk assured me, "You're totally wrong!" I allowed him a moment to explain, because often my fear-driven gut reactions are totally wrong.

"The machine is not to be feared," he told me. "The machine is where our music grows and from where it is born. It is not some Frankenstein creation at all, but a symbiotic creature that will enhance and enrich our lives!"

"The baby is the music. Wired in, bionic, a mix of organic and mechanical / electronic parts, growing inside the machine! It's totally cool. It's our friend."

Had Greg Kowalczyk never seen Metropolis? Terminator? I don't know what else... I think there's a scene that explains it all in Jurassic Park (Ok. I know that's about dinosaurs, but THEY can't be trusted either!) I'm sure probably half the episodes of Star Trek are about shit like this! It's all there in black and white, and then in colour and finally with so much CGI that it takes away from the meaning! Ok. Sure, the Terminator later comes back and saves the day, but the acting is terrible and the jokes begin to wear thin! That compUterus plays with samples from a host of B movies is just further confirmation that Greg Kowalcyzk is playing with dark forces that he cannot control.

Greg Kowalcyzk, like all madmen before him, thinks he can control the beast. He has been involved in the Toronto Industrial and Punk scene for over ten years; emerging from the Goth/Electro act Bitter Fall, and the Industrial act Born Into Oblivion, moving on to develop his skills in his main project, the IDM/Electro/Hardcore/Gabber act Pink Noise, while writing songs and playing guitar in blues/rockabilly/surf/post-punk act the Blind Cats, playing bass for Mip, and drums in the Punk band Skullians. Yes he's a musical fucking genius! But can he control this weird baby creature? That's what I want to know!

Kowalcyzk began the project in the early 2000s with experimental noise artist Trevor M. Wilburn, who has left the band try to tame his own beast, a solo project entitled Iron Imp. But even now the influence and perhaps the forbidding warnings of Wilburn remain etched in the DNA of the compUterus!

Perhaps Greg's idea to distract the compUterus by engaging it in a variety of styles, sucking up its CPU by having it incorporate the best elements from contemporary industrial with the genre progenitors, may work in taming the creation.

Monsters are invariably two-dimensional, focused on one simple pursuit. A more comprehensive attitude toward the compUterus may help it grow. The compUterus may turn away from possible destructive pursuits, and instead create a unique sound! How can a monster be creatively intoxicating with enough powerful beats to storm the dance floors and yet deep enough emotionally to offer cultivated arrays of smooth IDM waves and synth textures? This variety will at times restrain the brutal beats, the heavy electronic percussion and its all destructive possibilities! The result, it is hoped, will be a fully realized and rational creature, willing at last to live cooperatively within this world of humans and machines!

Only time will tell! The story of compUterus has just begun!

With this self-titled debut release, compUterus has assimilated the skills of illustrator and comic book artist Steph Dumais! The addition of Dumais is just adds to the terror! He's another mad genius whose creative juices will feed the machine! It's bad enough that he works as a storyboarder for an ad agency, but in what one might refer to as his free time, he has engorged himself on artistic projects, feverishly working with industrial labels such as Gashed!, Inception, COP Int'l, Beton Kopf Media, Geska, and Metropolis, while at the same time creating comic book masterpieces that include work with Tales of the TMNT for Mirage Publishing, Club Zero G from Disinfo Press, short strips for various horror anthologies, and his own series Zombie Commandos From Hell!, currently published by Virus Comix. Must we allow the compUterus to feed upon his fertile brain, the same way his own zombie creations feast upon the flesh of humans? Dumais will only give the compUterus' musical masterpiece an equally awesome physical form!